Sunday the 20th of march Triphouse Rotterdam will host another cinema night at the shop. This time we will show the documentary ‘Speaking in Code’ by Amy Grill. Entrance is free and you are welcome to bring your friends. The event starts at 20:00 hrs.

At first glance, Speaking in Code would appear to be just another documentary about electronic music. But one viewing reveals a series of character studies and vérité views of a musical genre, with an intimacy not seen since Don’t Look Back took us inside of Dylan’s folk music or The Decline of Western Civilization showed us the LA punk scene.

Director Amy Grill follows a series of characters (including her techno-obsessed husband) over a number of years as some struggle to make it while others thrive in the world of electronic music. It’s a window into a world filled with warehouse parties, endless gigs, international travel, risks, inventions, triumphs and breakdowns. The characters of Speaking in Code go through significant life changes that are as heartbreaking as they are sometimes humorous. These raw, honest moments unveil the idiosyncrasies of people who make electronic music their lives.

As the stakes get higher, Speaking in Code sheds light on the vast divide between common anti-techno attitudes in America juxtaposed with the thriving world of electronic music in Europe. Eventually, the struggle and strain to make the film begins to weigh on the director herself and her husband, who becomes more of a character in the film than she expected. Through the camera’s eye she watches David Day become completely submerged in the techno lifestyle while she becomes anxious to escape.

The characters she documents are as compelling as their storylines: Modeselektor, a rambunctious producer duo, are jettisoned from playing a tiny room in the US to playing to 20,000 people in Barcelona, all the while visiting their moms on a regular basis; journalist Philip Sherburne leaves America to find a more complete techno lifestyle in Europe; The Wighnomy Brothers are catapulted from their idyllic world in the former East Germany towards ceaseless gigs and they face their breaking point on camera; Tobias Thomas contemplates the near-end of his career; while Monolake, an inventor of the software that nearly all electronic musicians use to create music, continues his steady yet quirky approach to a life in music.

And back in the US, David Day tries tirelessly to turn Boston from a rock-centric town to a techno city. Day’s wanton attempts to make electronic music popular put strain on his marriage to the Director. The intertwined struggles to make the film and Day’s obsession become a crucial plotline the director could not ignore.

The result is a tightly-interwoven, compelling documentary that is at times light-hearted and at times heartbreaking. It’s the story of a scene from the inside out-intimate, raw and vivid. 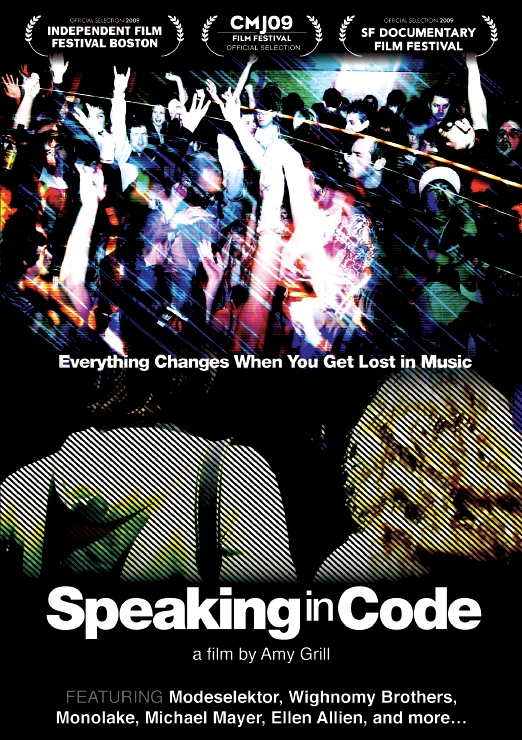 The idea for Speaking in Code was hatched on a sweaty dancefloor in Miami late March 2005 at around 4am, watching the one and only P. Diddy stand on set of DJ decks and scream at the crowd through a megaphone. Aspiring documentary filmmaker Amy Grill, music journalist Philip Sherburne and promoter/publicist David Day wanted to make a film not about the electronic dance music they love, but about the people and the obsessions behind the music. A behind-the-scenes glimpse as to who made the music and what made them tick. Little did they know it was an idea that would transform their lives forever.

In the beginning the skeleton crew interviewed many potential characters. These DJs, producers, promoters, and industry heads didn’t know that they were being camera tested as potential main characters for a vérité film. They thought they were being interviewed for just another survey documentary about electronic music. With Sherburne and Day attached to the film they were able to land virtually any interview requested since both were so deeply entrenched and well-respected in the global electronic music scene.

Once the main subjects were established, the crew (usually just Grill and Director of Photography Scott Sans, who was still in college for most of the production) traveled on and off for three years all over the world following the ups and downs of them all.

In the years making the film, they all went through remarkable life changes and as the film’s storyline unfolded even the director became an unwilling part of the film. Her life was turned upside down by its mission and her husband and main character (David Day) drifted further and further into an obsession with music. As they struggled to make the film a reality by every financial means possible, the movie itself also took on a starring role.

In the meantime, the profiles of the selected artists grew larger by the month. BPitch Control’s Modeselektor was called on by Radiohead to open a tour of Japan and Björk asked them for a remix. The Wighnomy Brothers legendary DJ sets grew in status and popularity and their unique producing style was copied by leagues of house and techno producers. The software, Ableton Live, invented by Monolake, became the standard music-making program for the world’s leading electronic music producers. Via Kompakt, Tobias Thomas released a series of acclaimed mix CDs, and Philip Sherburne, through his work for the tastemaking website Pitchfork Media, became the leading voice in electronic music journalism.

Throughout this process, a blog was kept by sQuare Productions which documented the making of the film and had thousands of fans visiting the site monthly. As mp3-blogs increased in popularity, so did the interest in the film and the people depicted within it. By the time the movie was finally complete, the awareness of the project had reached around the entire world, with blogs as far away as Russia and China eagerly reporting on the movie.

There have been numerous films about electronic music but none like Speaking in Code. A global phenomenon, electronic music is always viewed as a party-oriented, (many times vacant) series of subgenres that are impenetrable to casual movie goers. Electronic music documentaries were made for electronic music fans-simply a series of talking head interviews with those who created the scene or those who are the “superstar DJs” of today.

“Many electronic music docs focus on the static history and glorify certain figures and genres,” Grill said in a recent interview, “or try to justify or create a greater statement about the importance of electronic music. I wanted to tell a good story that was appealing to a mass audience.”

“I wanted the film to be as accessible as possible, without betraying or boring the true techno fans,” she told XLR8R magazine. “Not everybody in techno is making $20,000 a gig; they are doing it for the love of music. It is a community that’s only possible because people make sacrifices to follow their dreams, to make incredible music.”

With an expert eye and considerable experience, and through years of exertion and determination, Grill knows first-hand about sacrifice-she made more than a few of them to make an incredible movie.